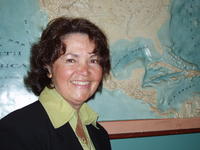 Professor Beatriz Manz was born in rural southern Chile. She obtained her university studies in the United States. The ethnographic research for her PhD in Social Anthropology was based on fieldwork in the highlands of Guatemala. Her Latin American roots have shaped much of her framework and research interest in rural communities. The focus of her research has remained contemporary Mayan communities in Guatemala. Her book Refugees of a Hidden War: the Aftermath of Counterinsurgency in Guatemala examined the displacement and human rights abuses committed by the Guatemalan military against indigenous rural communities in the highlands and rainforest, as well as in the refugee camps in the Mexican Lacandón region. Her latest book, Paradise in Ashes: A Guatemalan Journey of Courage, Terror and Hope (University of California Press, 2004) details the experiences of a village deep in the northern rainforest of Guatemala next to Chiapas, Mexico.

This village, settled in the early 1970s, was destroyed by the military in 1982. A grant from the John D. and Catherine T. MacArthur Foundation allowed her to take a year off to write the book. Her research interests have broadened to examine issues of memory, grief, and trust. The increasing numbers of Guatemalan undocumented immigrants to the United States induced her to explore cross-border issues and to develop an undergraduate course called The Southern Border.

Prof. Manz has had a long-term interest in human rights and justice and has been involved with several international, governmental and non-governmental institutions, such as the UNHCR, UNDP, Human Rights Watch, Amnesty International, Oxfam, Center for Justice and Accountability. She testified before the U.S. Congress about human rights abuses in Guatemala, and has written opinion pieces for the New York Times and other publications. She has been involved in court asylum cases as an expert witness. She appeared at the Audiencia Nacional (Spain’s National Court) to provide expert testimony in the Guatemala Genocide case in 2008.

In April 2013 Prof. Manz was called by the prosecution to testify as an expert and eyewitness at the genocide trial in Guatemala City against General Efraín Rios Montt. She was the only foreign eyewitness. Her testimony was based on her field research in the early 1980s in the Ixil highlands, the Ixcán rainforest and Lacandón, Chiapas refugee camps and refugee camps in Campeche and Quintana Roo.

She was the Chair of Berkeley’s Center for Latin American Studies from 1993-1998, where she remains active. Prof. Manz was Chair of the Department of Ethnic Studies from 2006-2009.

“Raised in the USA: An Exploratory Study of Latino Identity in California.” Co-authored with Paul Spoonley. Max Planck Institute for the Study of Religious and Ethnic Diversity. Göttingen, Germany. Working Paper 15-03.  ISSN 2192-2357, 2015

“Born in the USA: The Identities of America-Born Latinos” Co-authored with Paul Spoonley. Center for Latin American Studies, UC Berkeley, Working Papers No. 34. 2014.

“Bending the Arc of History,” in Berkeley Review of Latin American Studies, Spring 2013.

“Remembering the Past, Looking to the Future,” in Berkeley Review of Latin American Studies, Spring 2013.

Paradise In Ashes: A Guatemalan Journey of Courage, Terror, and Hope. Berkeley: University of California Press, 2004.

“Reflections on Remembrance: Voices of an Ixcán village,” In What Justice? Whose Justice? Fighting for Fairness in Latin America. Susan Eckstein and Timothy Wickham-Crowley, editors. Berkeley: University of California Press, 2003.