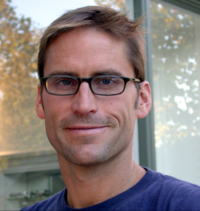 Jake Kosek received his doctorate in geography at the University of California, Berkeley (2002) and a masters degree at the Yale School of Forestry and Environmental Studies (1995). After receiving his doctorate, Jake held the Lang Postdoctoral Fellowship at Stanford University and was also a Lecturer there in the Department of Cultural and Social Anthropology. Subsequently, he received the Ciriacy-Wantrup Fellowship in the Department of Rhetoric at the University of California, Berkeley and then worked as an Assistant Professor in the departments of American Studies and Anthropology at the University of New Mexico before returning to the department of Geography at Berkeley.  He is coauthor of Race, Nature and the Politics of Difference (Duke University Press, 2003), which explores the intersections of critical theories of race and nature, and author of Understories: The Political Life of Forests in Northern New Mexico (Duke University Press, 2006), an ethnography that examines the cultural politics of nature, race, and nation amid violent struggles over forests in northern New Mexico. Understories received the John Hope Franklin Book Award for the Best Book in American Studies.

Jake’s current research builds on this past work on nature, politics and difference, using conceptual insights not only from geography but also anthropology, science studies and theories of history to develop new approaches to natural history as both an object of critical inquiry and a conceptual tool. Through fine-grained, multi-sited ethnography and detailed archival research, this project examines manifestations of natural history in the present, exploring contemporary taxonomies and varieties of nature, charting their resonance and discord with fossilized formations of prior natures. This includes: a social political history of the swarm, exploring how the flow of knowledge between bees and human collective behavior has remade discourses of modern citizenship and populations; an investigation of the biopolitics of criminality, weaving 18th- and 19th-century concepts of nature into contemporary bio-political discourses of law, race and justice; and a natural history of nanotechnology, tracing the history and politics of scale from scala naturae, one of the oldest hierarchical ordering of natures, to the contemporary political and cultural contexts that underlie scientific quests to remake the order of modern nature at the nanoscale.

Jake also has a long history of applied and engaged political work outside of the academy. He has spent over 8 years working for non-profits and doing applied research on human rights, environmental justice, and poverty in the U.S., Africa and Latin America. His diverse teaching experiences – in university settings such as Berkeley, Stanford, and the University of New Mexico, as well as non-university settings such as San Quentin State Prison and rural community workshops in rural West Virginia, Peru and Bolivia – have helped him develop a wide variety of approaches to pedagogy. His teaching combines a dedication to conceptual rigor with an applied sensibility, encouraging students to make connections between abstract concepts and engaged political thought and action.

“The Cultural Politics of Community Mapping.” Common Property Research Digest, no. 45 (May). 1998.