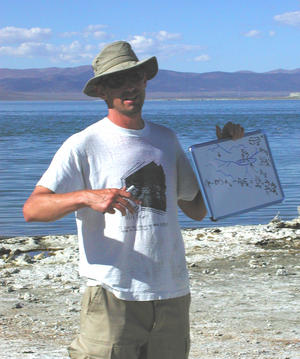 The global physical environment is a vast and complex machine composed of numerous interconnected systems capable of dramatic change over brief intervals of time. A solid understanding of the character and dynamics of this machine can explain a diversity of engaging geographical phenomena, from the aesthetically stunning views on a high Sierra Nevada mountain summit to the devastating loss of life and property resulting from landslides and floods. The purpose of my scholarship is to design, improve, evaluate, and enjoy such explanations. Two complementary approaches in this pursuit are (1) to achieve a rigorous physically-based understanding of environmental processes and system dynamics, and (2) to reconstruct the remarkable “natural experiments” of Earth’s environmental history. I use both approaches.

Constraints on time, technology, and brainpower have forced me, like most scholars, to the bittersweet reality of specialization; my research efforts emphasize environmental change of polar regions, with a focus on glaciologic problems. The choice of polar glaciology reflects the unique and powerful contributions that this subdiscipline makes to environmental change research. Ice core reconstructions of environmental history offer the most comprehensive, varied, and high-resolution view yet achieved of past environments. The ice sheets themselves are a major control on global sea level and albedo, and on high-latitude atmospheric and oceanic circulations, and on physical landscape characteristics. No other topographic features of this size and importance are changeable on such short time scales.

I use a quantitatively rigorous and novel blend of geophysical and geochemical techniques to address questions that are important in this context: How have climatic temperature and atmospheric greenhouse gas concentrations covaried in the past? What is the tempo and magnitude of climate changes in polar regions? What determines the isotopic composition of precipitation? How have the great ice sheets changed in the past, and how will they change in the future? How do they flow? How are microphysical processes in ice manifest at the scale of whole glaciers and ice sheets?

In addition to these major research themes, I also do some work on biogeography and temperate geomorphology. I very much enjoy the breadth and diversity of scholarship in the Berkeley Geography Department (my home department) and also am affiliated with the Department of Earth and Planetary Science and with the Energy and Resources Group.

Cuffey, K.M. and W.S.B. Paterson (2010). The Physics of Glaciers, Fourth Edition. Elsevier, 693 pp.  My major update (30% new material plus 40% major revision) of the classic advanced text for students and researchers in glaciology. This book reviews the current scientific understanding of glaciers and includes critical commentary and original analyses of key glaciological topics.  The reference list and a document indicating the page numbers at which citations appear are available online from Elsevier at

At this site, too, you will find all of the figures, available as pdf files.

Cuffey, K.M. and J.L. Kavanaugh (2011).  How nonlinear is the creep deformation of polar ice? A new field assessment.Geology 39(11), 1027-1030. Confirms that the stress exponent of ice deformation is 3 to 4, and definitely not as low as 2, in actively deforming polar glaciers.

Kavanaugh, J.L., K.M. Cuffey, D.L. Morse, H. Conway, and E. Rignot (2009). Dynamics and mass balance of Taylor Glacier, Antarctica: 1. Geometry and surface velocities. Journal of Geophysical Research 114, F04010. This paper and the following three report at length on the dynamics, configuration, and stratigraphy of an outlet glacier from the East Antarctic Ice Sheet that terminates in Taylor Valley.

Cuffey, K.M. (2008). A matter of firn. Science 320, 1596. In which I have the pleasure of providing commentary on an analysis by Michiel Helsen and colleagues.

North, G., K.M. Cuffey, and ten others (2006). Surface Temperature Reconstructions for the Last 2000 Years. National Academies Press, 142 pp. In which a panel of experts confirmed some of the criticisms of temperature reconstructions while also explaining why the controversy makes no difference to our understanding of anthropogenic global warming.

Howard, J.K. and K.M. Cuffey (2006). Factors controlling the age structure of Margaritifera falcata in two northern California streams. Journal of the North American Benthological Society 25, 677- 690. This manuscript and the next one report some of the findings from a project about freshwater mussels in northern California rivers.  The intersection of geomorphology, ecology, and hydrology is an exciting area, one that even a glaciologist should explore.

Kavanaugh, J.L., and K.M. Cuffey (2003). Space and time variation of δ18O and δD in Antarctic precipitation, revisited.Global Biogeochemical Cycles 17, 1017. An update and elaboration of conceptual models explaining the determinants of precipitation isotopes in Antarctica.

Cuffey, K.M. and G.D. Clow (1997). Temperature, accumulation and ice sheet elevation in central Greenland through the last deglacial transition. Journal of Geophysical Research102(C12), 26383-396. This paper and the next one reveal how major climatic parameters changed over the last 50 thousand years in central Greenland.

For science and investigation: Committee for Skeptical Inquiry

2. The President of the United States:

Eyes of the World. The Grateful Dead, any live version longer than 10 minutes: look it up on YouTube.

Live at the Fillmore. Derek and the Dominos (recorded 1970).

4. Some really great passages I found in Proust (Enright/Kilmartin translation):
“From decade to decade their wordy battles are renewed, for it
is not only social groups that are kaleidoscopic but ideas too
about society and politics and religion; refracted through large
bodies they can assume a momentary amplitude but their
life-span is the brief one of ideas which owe their success to
their novelty and gain the adherence only of such minds as
are not particular about proof.
So it is that parties and schools follow upon one another’s
heels, attaching to themselves always the same minds, those
men of moderate intelligence who are an easy prey to the
successive enthusiasms into which others more scrupulous
and less easily satisfied in the matter of proof will decline
to plunge.”
Time Regained, p. 462

“They thought certainly of these hecatombs of regiments annihilated
and passengers swallowed by the waves;
but there is a law of inverse proportion which multiplies
to such an extent anything that concerns our own welfare and
divides by such a formidable figure anything that does not
concern it, that the death of unknown millions is felt by us
as the most insignificant of sensations, hardly even as
disagreeable as a draft.”
Time Regained, p. 342

“The town that I saw before me had ceased to be Venice.
Its personality, its name, seemed to me to be mendacious
fictions which I no longer had the will to impress upon its
stones.  I saw the palaces reduced to their basic elements,
lifeless heaps of marble with nothing to choose between them,
and the water as a combination of hydrogen and oxygen,
eternal, blind, anterior and exterior to Venice.”
The Fugitive, p. 222

“My innocence of the alleged crime was never taken into
consideration, for that was the sole hypothesis which nobody
was willing to accept for an instant.”
The Fugitive, p. 27

“…physical desire has the marvellous faculty of giving
intelligence its true value and providing solid
foundations for the moral life.”
The Fugitive, p. 77

“But in exchange for what our imagination leads us to
expect and we give ourselves so much futile trouble trying to find,
life gives us something which we were very far from imagining.”

The Fugitive, p. 80
“There are moments in life when a sort of beauty is born
of the multiplicity of the troubles that assail us,
intertwined like Wagnerian leitmotifs, and also from the
notion, which then emerges, that events are not situated
in the sum of the reflections portrayed in the wretched
little mirror which the mind holds in front of it and calls
the future, that they are somewhere outside and spring up
as suddenly as a person who comes to catch us in the act.”
The Fugitive, p. 26-27

“And even if this love leads to disillusionment, it does
at least stir, even by so doing, the surface of the soul
which would otherwise be in danger of becoming stagnant.”
The Captive, p. 661

“And that very morning she had told me [otherwise]! I watched
a tongue of flame seize and devour in an instant a novel which I
had spent millions of minutes in writing.”

The Captive, p. 819
“Was he alluding to the vice which he had succeeded hitherto
in concealing from the world, but of which he was himself
aware and whose seriousness he perhaps exaggerated, just
as children who make love for the first time,
or merely before that age seek solitary pleasure,
imagine themselves to be like a plant which cannot
scatter its pollen without dying immediately afterwards?”
Time Regained, p. 418

“… we find a little of everything in our memory; it is a sort of
pharmacy, a sort of chemical laboratory, in which our groping hand may
come to rest now on a sedative drug, now on a dangerous poison.”
The Captive, p. 856

“Then I told her who I was and at once, as though the sound
of my name had broken a spell and I had lost the look
of an arbutus-tree or a kangaroo which age no doubt had given
me, she recognised me …”
Time Regained, p. 518

“One was terrified, because it made one think of the vast periods
which must have elapsed before such a revolution could
be accomplished in the geology of a face, to see what erosions
had taken place all the way along the nose, what huge alluvial
deposits at the edge of the cheeks surrounded the whole face
with their opaque and refractory masses.”
Time Regained, p. 510

“The writer’s work is merely a kind of optical instrument
which he offers to the reader to enable him to discern what,
without this book, he would perhaps never have perceived
in himself.”
Time Regained, p. 480