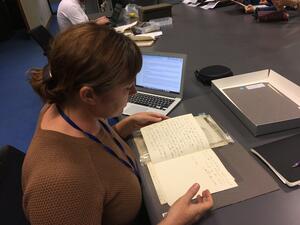 Current Project: Australia’s landscape is one defined by fire. Over millennia, the continent’s traditional caretakers, Aboriginal Australians, have wielded fire as an ally to manage the continent referred to as the ‘largest estate on earth’ (Gammage 2011). This landscape’s fire history is distinct from the continent’s post-contact colonial fire story. Empirical analysis has tracked a new scale and form of fires since colonization, culminating in the 2019-2020 fire season. Known as “Black Summer,” it was the largest, most intense, and economically catastrophic fire on record, prompting the government to note that the fires were “on a scale we have not seen in Australia in recorded history” (NSW Government 2020, iv). These distinct and contradictory fire histories demand a closer look, one that prioritizes the nature and processes of settler colonialism and its material effects. My dissertation analyzes this contradiction, by asking how did Australia’s mega-fires materialize on a landscape changed by fire for centuries? While geographers have asserted claims about the role social history has played in 20th century fire disasters (Pyne 1998, Davis 1998), what has been overlooked is the implications settler colonial histories have had on the transformation of fires in the Australian landscape. Particularity, how the logic of dispossession and settlement engendered ideas about ownership, control, and domination of the land post-contact, and how the implications of these came with devastating material implications as witnessed in the 2019-2020 fire season. In order to answer, how were Australia’s mega-fires produced, detailed attention needs to be paid to the institutional infrastructure built during the settler colonial period, how the physical environment was understood, and how these ideas were translated into land-based practices. Analyzing the historical geography of the greater Blue Mountains area through the lens of settler colonialism, this dissertation will show how Black Summer was a preventable (un)natural disaster.