[Event] [Mar. 4] “We will know what to do with our own destiny”: Afghan feminism and the politics of freedom

“We will know what to do with our own destiny”: Afghan feminism and the politics of freedom
Thursday, Mar 4, 2021
05:00 PM in Pacific Time (US and Canada)

In the era of decolonization, newly independent postcolonial nation-states looked toward revolutionary communism as offering a visionary framework for liberation and self-determination. However, in the aftermath of the Cold War, models of liberal democracy have been upheld as the purveyors of freedom, rights, and political agency. This talk explores the after-lives of communism in contemporary feminist political platforms that work both within an Afghan nationalist context, as well as garner support across the Afghan diaspora. These movements bring together what are often understood as incommensurable political discourses as they advocate for secularism, Islamic governance, democratic nationalism, and anti-imperial/anti-occupation politics of self-determination. The talk argues not so much for the commensurability (or lack thereof) of competing political frameworks, but instead explores how actors position themselves across disparate political landscapes, articulating imaginaries not captured by the universal promises of liberalism.

Sherine Ebadi is a PhD Candidate in the department of Geography at UC Berkeley. Her work explores the confluence of democratic nationalism and Islam in the context of post-communist political movements of Central Asia. Working with Afghan refugees and diasporic communities across North America and Europe, her research considers how Muslim identity and displacement re-work discourses of secularism and human rights through the lens of women’s empowerment. Her research has been supported by the National Science Foundation, Fulbright-Hays, FLAS, the UC Consortium for Black Studies and the UC Berkeley Chancellor’s Fellowship. 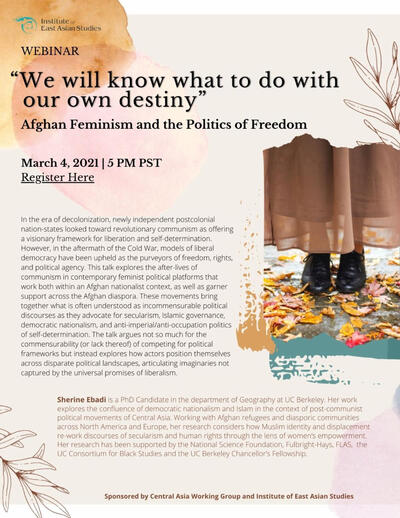