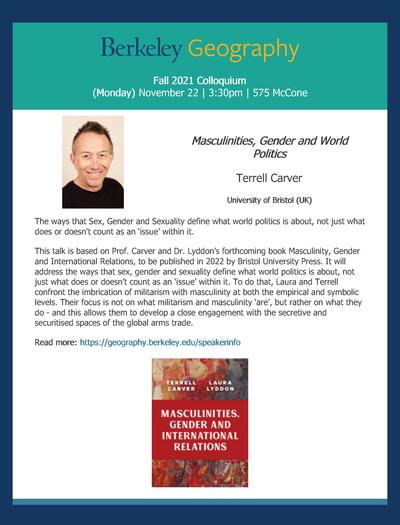 The ways that Sex, Gender and Sexuality define what world politics is about, not just what does or doesn't count as an ‘issue’ within it.

This talk is based on Prof. Carver and Dr. Lyddon’s forthcoming book Masculinity, Gender and International Relations, to be published in 2022 by Bristol University Press. It will address the ways that sex, gender and sexuality define what world politics is about, not just what does or doesn’t count as an ‘issue’ within it. To do that, Laura and Terrell confront the imbrication of militarism with masculinity at both the empirical and symbolic levels. Their focus is not on what militarism and masculinity ‘are’, but rather on what they do - and this allows them to develop a close engagement with the secretive and securitised spaces of the global arms trade.

As a political theorist I have specialised in Marx, Engels and Marxism, and on philosophy and methodology of social science. In particular I have concentrated on textual work in order to raise standards of interpretation. Besides doing my own translations of Marx, I have addressed myself to investigating the exact roles played by Engels in the composition of the Marxian canon and in the interpretative tradition that surrounds it. In doing this I have engaged with deconstructionist and post-modern methodologies, following developments in feminist theory and reception studies particularly closely. Some of my work has employed feminist and men's studies perspectives on masculinities, and I have contributed to the political theory of sex, gender and sexuality, in particular in International Relations, since 1996.

I have researched selected aspects of UK, American, Chinese, South East Asian, Australian, Latin American and European politics to illustrate what political theory can do. I am co-general editor of three book series: 'Routledge Innovators in Political Theory', 'Globalization' for Rowman & Littlefield, and 'Marx, Engels, and Marxisms' for Palgrave Macmillan, and am also co-editor-in-chief of the journal Contemporary Political Theory. I have been repeatedly re-elected to the Executive Committee of the Political Studies Association of the United Kingdom and have done considerable work to internationalise the profession by initiating and administering programmes of exchange and sponsorship with similar associations all over the world. I have been elected to the Executive Committee of the International Political Science Association, serving as Vice-President for Europe, and Program Co-Chair for the 25th World Congress of Political Science. And I am an Academician of the Academy of Social Sciences.

I was funded by the UK Arts & Humanities Research Board (2002-3) to finish my book on how men have presented men as overtly gendered and as apparently de-gendered beings in political theory. Since then I have co-authored/edited (with Samuel A. Chambers) two books (2008) on the political theory of Judith Butler. My latest award (2007) from the Arts & Humanities Research Council has enabled me to prepare a new English rescension of the manuscripts commonly known as Marx & Engels's The German Ideology: Part One, published as a 2-volume (2014) historical and analytical study. More recently I have published The Cambridge Companion to the Communist Manifesto (with James Farr, 2015) and an introductory book Marx (2018) for Polity Press. My 'Palgrave Pivot' Engels Before Marx was published in 2020, along with a 30th anniversary edition of The Life and Thought of Friedrich Engels, also from Palgrave Macmillan.’