[Event] Nov 3 Colloquium - What is Resistance? 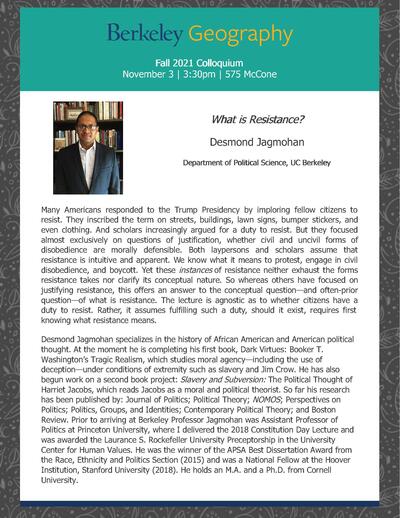 Many Americans responded to the Trump Presidency by imploring fellow citizens to resist. They inscribed the term on streets, buildings, lawn signs, bumper stickers, and even clothing. And scholars increasingly argued for a duty to resist. But they focused almost exclusively on questions of justification, whether civil and uncivil forms of disobedience are morally defensible. Both laypersons and scholars assume that resistance is intuitive and apparent. We know what it means to protest, engage in civil disobedience, and boycott. Yet these instances of resistance neither exhaust the forms resistance takes nor clarify its conceptual nature. So whereas others have focused on justifying resistance, this offers an answer to the conceptual question—and often-prior question—of what is resistance. The lecture is agnostic as to whether citizens have a duty to resist. Rather, it assumes fulfilling such a duty, should it exist, requires first knowing what resistance means.

Desmond Jagmohan specializes in the history of African American and American political thought. At the moment he is completing his first book, Dark Virtues: Booker T. Washington’s Tragic Realism, which studies moral agency—including the use of deception—under conditions of extremity such as slavery and Jim Crow. He has also begun work on a second book project: Slavery and Subversion: The Political Thought of Harriet Jacobs, which reads Jacobs as a moral and political theorist. So far his research has been published by: Journal of Politics; Political Theory; NOMOS; Perspectives on Politics; Politics, Groups, and Identities; Contemporary Political Theory; and Boston Review. Prior to arriving at Berkeley Professor Jagmohan was Assistant Professor of Politics at Princeton University, where I delivered the 2018 Constitution Day Lecture and was awarded the Laurance S. Rockefeller University Preceptorship in the University Center for Human Values. He was the winner of the APSA Best Dissertation Award from the Race, Ethnicity and Politics Section (2015) and was a National Fellow at the Hoover Institution, Stanford University (2018). He holds an M.A. and a Ph.D. from Cornell University.