[Event] Oct 6 Colloquium - The Legacy of Korematsu v. The United States: The Perils to Democracy When Racism Shouts Louder Than Facts, the Rule of Law, and the Constitution 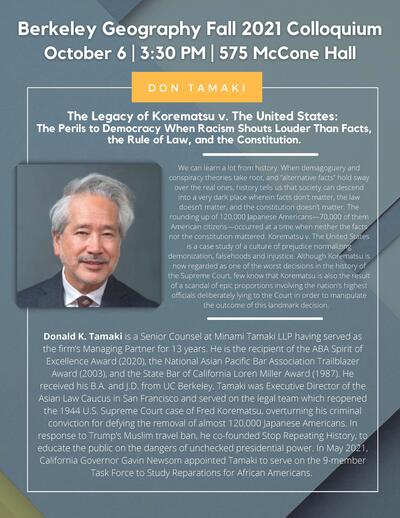 The Legacy of Korematsu v. The United States: The Perils to Democracy When Racism Shouts Louder Than Facts, the Rule of Law, and the Constitution

We can learn a lot from history. When demagoguery and conspiracy theories take root, and “alternative facts” hold sway over the real ones, history tells us that society can descend into a very dark place wherein facts don’t matter, the law doesn’t matter, and the constitution doesn’t matter. The rounding up of 120,000 Japanese Americans—70,000 of them American citizens—occurred at a time when neither the facts nor the constitution mattered. Korematsu v. The United States is a case study of a culture of prejudice normalizing demonization, falsehoods and injustice. Although Korematsu is now regarded as one of the worst decisions in the history of the Supreme Court, few know that Korematsu is also the result of a scandal of epic proportions involving the nation’s highest officials deliberately lying to the Court in order to manipulate the outcome of this landmark decision.

Donald K. Tamaki is a Senior Counsel at Minami Tamaki LLP having served as the firm’s Managing Partner for 13 years. He is the recipient of the ABA Spirit of Excellence Award (2020), the National Asian Pacific Bar Association Trailblazer Award (2003), and the State Bar of California Loren Miller Award (1987). He received his B.A. and J.D. from UC Berkeley. Tamaki was Executive Director of the Asian Law Caucus in San Francisco and served on the legal team which reopened the 1944 U.S. Supreme Court case of Fred Korematsu, overturning his criminal conviction for defying the removal of almost 120,000 Japanese Americans. In response to Trump’s Muslim travel ban, he co-founded Stop Repeating History, to educate the public on the dangers of unchecked presidential power. In May 2021, California Governor Gavin Newsom appointed Tamaki to serve on the 9-member Task Force to Study Reparations for African Americans.