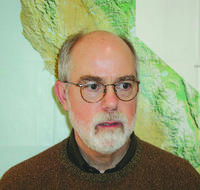 Dr. Paul Groth passed away at the age of 72 on January 16, 2022 in Berkeley, California. Paul was a beloved friend, son, brother, cousin, brother-in-law, and uncle.

Paul joined UC Berkeley faculty in 1983 and spent much of his career studying architecture that organized the lives of low-income and working class people. His overarching interest was in cultural landscape studies, particularly in the United States. His work bridged cultural geography, historical geography, urban geography, and some aspects of physical geography, along with social and cultural history. Paul studied the ways in which social groups have used space (as buildings, rooms, street grids, fields, or yards) to articulate social relations, to derive cultural meaning, and to create social change. While his research looked primarily at center cities, his teaching and thinking also looked avidly at rural and suburban settings.

Paul started his academic life with a professional degree in architecture, and the geographical analysis of building types remainsed an important focus of his research. He wrote about the cultural interrelationships between workers’ houses, work places, and recreation sites in West Oakland, California. He also studied the landscapes of socially and politically disenfranchised people in settings such as Native American reservations and single-room housing. His book about residential hotels uses the geographical evidence of ordinary urban architecture to fill an important but often ignored aspect of American urban history. Paul described his methods as “purposely eclectic.” As a former student of Allan Pred, Richard Walker, Peirce Lewis, J. B. Jackson, and James Vance, Paul looked for ways in which social theory could be used to illuminate cultural landscape questions.

Paul was a celebrated Professor Emeritus of the Departments of Architecture and Geography at UC Berkeley, teaching for over 30 years. In 2015, Paul retired but our department was fortunate enough to have him stick around for a couple of years thereafter. To honor Paul's contributions to the study of the built environment, PLATFORM organized a wonderful festschrift tribute, inviting former students, colleagues, and others to contribute short pieces sharing a few thoughts about how Paul’s work — his writing, his research methods, his teaching, his mentoring — has shaped theirs. We are so grateful we were able to witness his generous view of the world.