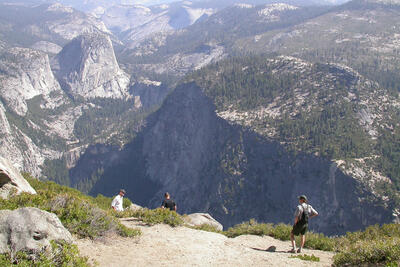 “Yosemite Valley is one of the most famous topographic features on the planet. And of course, if you go to Yosemite Park and read the signage, they will give you numbers for when it became a deep canyon. But up until this project, every single claim about how old this valley is, when it formed a deep canyon, was just based on assumptions and speculation.” - Professor Kurt Cuffey

After working on the project for more than a decade, UC Berkeley Geography professor and renowned glaciologist Kurt Cuffey, along with UC Berkeley geochemist David Shuster and Yosemite National Park geologist Greg Stock, publish that much of Yosemite Valley’s depth was carved since 10 million years ago, and most likely even more recently — over the past 5 million years. This cuts about 40 million years off the oldest estimates.

Interested in learning more about this project? Read the blurb by the Berkeley News site and the article by the SF Chronicle, check out Cuffey's published findings in the Geological Society of America Bulletin, and visit Professor Kurt Cuffey's faculty page for more information about his research.

Photo Caption: In 2010, two of the study’s authors — David Shuster of UC Berkeley (left) and Yosemite Park geologist Greg Stock (right) — collected rock samples from the rim of Yosemite Valley, where the granite has eroded only slowly over the last 50 million years. In the distance is the upper Merced River valley. Former UC Berkeley graduate student Johnny Webb is at center. Photo credit: Kurt Cuffey