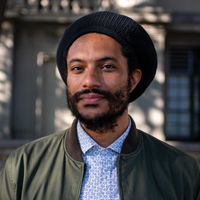 Dr. Jovan Scott Lewis is the Chair of the Geography Department. Following his appointment by Governor Newson, Dr. Lewis has concurrently served as a member of the California Reparations Task Force. His new novel, Violent Utopia, was recently released in early October.

What are you working on now that you want to feature? Research? A new course?

My new book, Violent Utopia, just came out. The work of reparations that I’ve been doing for the last year-and-a-half features as a primary point of analysis in both of my books [i.e. Scammer's Yard: The Crime of Black Repair in Jamaica]. Simultaneously, I’ve been working with the state as a member of the California Reparations Task Force. We have a final report and set of recommendations due to the state government in Summer 2023, with the responsibility for drafting policy to close the racial wealth gap in California.

California is a good place to try reparations because it was a “free” state. The way that slavery is not involved removes the discourse of “slavery was so long ago” and instead we can focus on the reproduction of the inequality as a socio-economic force from Jim Crow past gentrification as it cycles again and influences Black lives. If we can do reparations here in California, we could have it as a national debate. If we were thinking only of slavery, it would be the same narrative of the North-South discourse and history, the myths of which have been dispelled. if we were working from a former slave state, we’d be hindered by these old frameworks. Starting from a “free state” frames the conversation from one of the most broadly applicable and relevant available intellectual positions.

I’m trying to maintain an intellectual project as an academic and scholar, so I’ve begun working on some new research that deals with reparations, but thinking about what it means to recognize that we’re living in a reparative conjuncture. We’re in a moment where we’re willing to recognize the multiple societal injuries and harms. Alongside the tracing of this moment, I’m trying to figure out what to do about it, and how to seize on this moment.

What’s your favorite book on the bookshelf?

Deborah Thomas’s Modern Blackness - it is my favorite book because, as a work of anthropology and history, it really helped me to fully appreciate how wealth and blackness gets operationalized in political processes. It’s basically a book about the transformation of Jamaica’s cultural politics around the time of independence.

The most important book on my bookshelf is Horace Campbell’s Rasta y Resistencia. I first read the English version when I was 14 or 15, and it was the book that introduced me to Walter Rodney and the black radical tradition, and led to me as a teenager reading a lot of books from the black radical texts, including Fanon and so on.