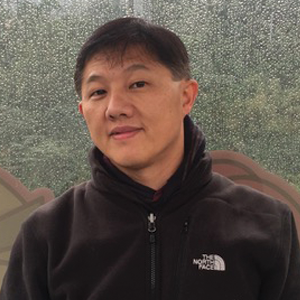 As a kid growing up in South Africa, I was easily seduced by the slick first-world science by the likes of NASA and CERN (and, of course, Star Trek). I moved to the United States intending graduate studies in physics, but soon realized an applied bent and budding interest in the global environment. I met a professor studying climate; the rest is (as they say) history. It turned out to be a good fit. Climate science has roots in the basic physical sciences but branches everywhere: atmospheric science and oceanography are at the core, and with increasing links into geological, biological, and even social sciences. I also lucked out in the timing (thanks, mom!) by coming into this field at an interesting time; had I started fifty years ago, I might have been consigned to making charts of seasonal rainfall for tourist brochures. I enjoy the license to learn that goes with the job: on the one hand, researching processes of the climate system using pencil and paper or the latest kitchen sink climate models running on supercomputers; on the other hand, broadening my knowledge and making connections to environmental and societal issues through teaching and interacting with students and colleagues interested in climate change.

My research focuses on large-scale tropical atmosphere-ocean (and increasingly, land) systems and its interactions with the global climate. My early work was on the large-scale convective climate of the tropical Atlantic, which possesses a remarkable property of being exquisitely sensitive to change; and in changing, become agents of climate change elsewhere. It got me to thinking about the larger role the tropics play in the global climate system, in particular the way it responds to, and feeds back on, climate forcing. This line of questioning has led me to consider ocean-atmosphere interactions in different ocean basins, and the interactions between them; to interactions between the extratropics and tropics, focusing on processes as far removed as the thermohaline circulation, and building ice sheets. Past climate change motivate much of my research, as it offers valuable clues on the linkages between various climate processes and just how susceptible our climate is to change. My ultimate goal is to understand how the global climate reorganizes in the face of climate forcings, past and future; while that goal is still in the far distance, all signs point to the tropical climate as key.

More details on past and current research topics can be found here.